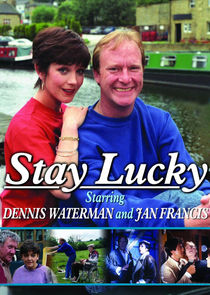 Stay Lucky is a British television comedy-drama series ran from 8 December 1989 to 6 August 1993. Made by Yorkshire Television and screened on the ITV network, it starred Jan Francis and Dennis Waterman. Stay Lucky was a drama about a small-time gangster Thomas Gynn (Dennis Waterman) from London who discovers a new life up North in Yorkshire.

Helping widowed, self-sufficient businesswoman Sally Hardcastle (Jan Francis) when her car breaks down on the motorway, Thomas reluctantly accepts an offer of a lift to Leeds. Over the coming months, the two become involved in a series of misadventures that soon finds them being drawn closer together.