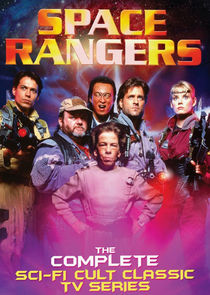 Space Rangers is an intergalactic action-adventure in the best tradition of "Star Wars". Created by Pen Densham, "Space Rangers" is a compelling story about a group of adventurers for whom no task is too great. This six part miniseries features an ongoing cast of rugged, likeable peacekeepers who must do battle against a new set of obstacles in each of six closed-end episodes. The year is 2104. Explorers have stretched civilization to the farthest reaches of the galaxy establishing remote outposts. They've discovered new worlds and learned to share them with new races. A few elite men and women have volunteered to go to the frontier, not to rule, but to uphold the law. These are the "Space Rangers", part Peacekeepers, part Marines. Much like the pioneers or cavalry before them, who tamed the Wild West, the "Space Rangers" have left behind their old, comfortable life to seek new frontiers and challenges. With this quest come new enemies as well. None are as fierce as the "Banshies", who are akin to the Apaches to those who were trying to colonize the Old West. These brutal warriors are the greatest fear and impediment in the galaxy. While "Space Rangers" deals with life on the frontier, the program also addresses our current problems in a futuristic setting. Topics such as honor, responsibility or losing one's job to automation underscore the adventurous elements in each episode. This sense of morality or "message" is subtely interspliced into each episode, taking "Space Rangers" one step beyond the average sci-fi show.