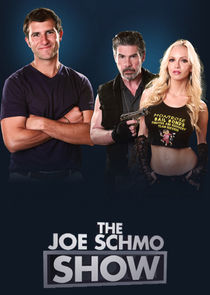 The Joe Schmo Show is a one-hour, 10-episode series featuring a real guy who believes he is on an over-the-top reality show looking for America's next bounty hunter and the chance to win $100k. What he doesn't know is the entire show is FAKE. For over a year his entire world was carefully planned by a team of writers, producers, and actors all performing for him. His "competitors" are actually actors representing every classic reality show cliché, including the Buddy, the Jerk, the Model, and even Lorenzo Lamas, playing a washed-up version of himself. The actors must do their best under these insane circumstances to follow a pre-determined script. One break in character or a single misspoken word could bring the entire show crashing down around them. He'll experience everything from flame throwers and stun guns to being chained to federal inmates and capturing his own fugitive. "Joe" must navigate this ridiculous world while we discover how a contestant reacts to being thrust on a show filled with every outlandish element reality television has to offer. How far can producers push this 'reality,' and the ensuing ridiculous competitions? Will "Joe's" character remain intact? And of course, will the actors be convincing enough or will our unsuspecting "Joe" figure it all out?