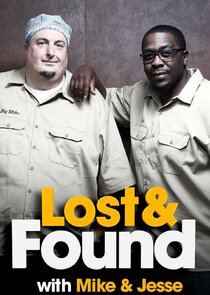 Ever wanted to go back and thank someone—a parent, a teacher or a friend? Discovery Family Channel's all-new original series, Lost & Found with Mike & Jesse, produced by Leftfield Pictures, features the work of "professional finders" who help people do just that. Mike Schario and Jesse Brown own Finders Keepers, a Sugar Creek, Ohio "weird-tique" shop filled to the brim with pop culture memorabilia from the past 50 years—and on the side are also veritable treasure hunters hired to track down long lost, but much loved, items. Lost & Found will debut in November 2015 on Discovery Family Channel, as part of Project Thank You, the network's month-long campaign to encourage and empower viewers to express their gratitude to the people in their lives who have made a difference.

Born to be finders, best friends Mike and Jesse each grew up with a keen talent for finding lost objects—Mike worked alongside his uncle at the Cleveland Municipal Stadium's lost and found department, while Jesse would hide and search for buried treasures in his grandmother's backyard. Coworkers and friends for several years—and with their mutual interest discovered—the two opened Finders Keepers in 2012. In this eight-part series, Mike and Jesse leave no stone unturned as they take their expertise on the road to help families across America find a lost or significant personal item for the purpose of saying thank you to the influential people in their lives. Lost & Found follows Mike and Jesse as they go to extremes to help families show gratitude, provide closure, and bring back cherished memories.