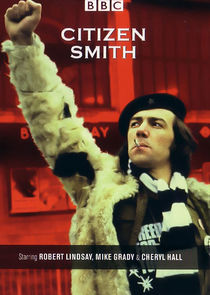 Citizen Smith was a British television sitcom written by John Sullivan which was broadcast from April 12, 1977 - December 31, 1980 on BBC 1.

Citizen Smith starred Robert Lindsay as "Wolfie" Smith, a young Marxist "urban guerrilla" in Tooting, South London, who is attempting to emulate his hero Che Guevara. Wolfie is a reference to the Irish revolutionary Wolfe Tone who used the pseudonym Citizen Smith in order to evade capture by the British. Wolfie is the self-proclaimed leader of the revolutionary Tooting Popular Front (the TPF, merely a small bunch of his friends), the goals of which are "Power to the People" and "Freedom for Tooting". In reality he is an unemployed slacker and petty criminal whose plans fall through due to apathy, ineptitude and inexperience.