The Adventures of Figaro Pho 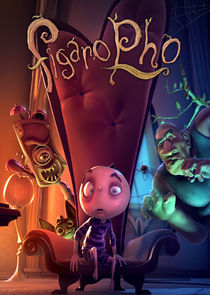 Everyone has at least one irrational fear…. in the case of Figaro Pho, he has them all!

The Adventures of Figaro Pho is a series about a warm-hearted, adorable, quirky and mischievous character … who just happens to be afflicted with every phobia imaginable. He's afraid of vampires, toilets, mad dogs, aliens, and even being stared at by a duck! He's also petrified of being alone, and so Figaro has created a mechanical companion – a dog-like robot he calls Rivet.

Figaro and Rivet live in a rundown Gothic-style mansion built precariously on a cliff above the small town of Cogville. Figaro's crumbling house is effectively a death trap containing thousands of things that he fears, and unfortunately the outside world is even more terrifying to poor Figaro. The outside world insists on knocking on Figaro's door, bringing all sorts of new characters and phobias into Figaro's life. On the odd occasion when Figaro finds the courage to venture down into the town, his phobias escalate even further. New faces and new places mean new fears!

With such an onslaught of phobias, it would appear that Figaro's life is a complete tragedy. Not so! Figaro is a creative genius, constantly constructing imaginative mechanisms and strategies to combat his phobias. Fantastical inventions fill his home. Things however do not always go to plan, and quite often Figaro needs the help of his robotic dog Rivet to get him out of a sticky situation. Every episode focuses on one key fear that takes Figaro on a emotional rollercoaster that is sometimes scary, hilarious, disgusting and surreal. It's Figaro's powerful imagination that sets him off on adventures with monster sized fish, oversized mosquitos and the most hideous public toilet you will ever encounter.

Step inside Figaro Pho's absurdly phobic world and embark upon a journey of the comedic and the bizarre.