A World in Arms Britain's War Against Napoleon 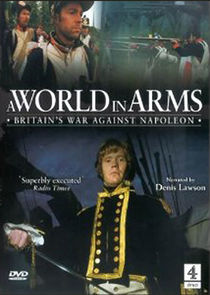 The Revolution of 1789 transformed France from decadent monarchy to modern state. It threw up the first citizen's army and introduced the concept of Total War. Under the leadership of Napoleon Bonaparte, the greatest general of his age, France established a mighty empire. Its haughty ambitions naturally brought it into conflict with the British Empire, and the war that erupted as a result shook the world ... It was, truly, the first 'world war'. As empires clashed, five million people died in fighting that raged from Russia to Spain and from Java to the Caribbean. And when it ended with the British Empire triumphant and French ambitions crushed, nothing would ever be the same again. This major three-part series from Channel 4 brings to life the story of that epic war, combining expert commentary and analysis with dramatic battle re-enactments and journal and diary entries from those who fought. It provides vivid accounts of the key battles at Trafalgar and Waterloo as well as many lesser-known engagements, and reveals how a new kind of warfare and world was born in the maelstrom of conflict.