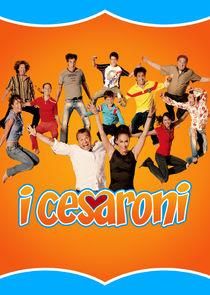 I Cesaroni is an Italian television series produced since 2006 and inspired by the Spanish series "Los Serrano". It tells the story of the Cesaroni family, consisting of two former school sweethearts, Giulio and Lucia, that find each other after many years and decide to marry and move in together in Giulio's home at Rome. Both divorced and with children, Giulio's sons Marco, Rudi and Mimmo, and Lucia's daughters Eva and Alice, they all have to find a way to live together, between school, love and a bit of family chaos.