Before We Ruled the Earth 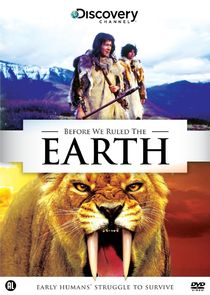 1.7 million years ago in Africa, Homo ergaster, an ancient predecessor of modern humans, had to dig to survive. They lived in the elements among the monsters of the era, such as saber-toothed cat. Over time, early humans evolved and developed simple tools, began to communicate, and learned to control their most important tool: fire. However, the monsters were still there. 300,000 years ago, Homo erectus learned to hunt the giant Irish elk, the use of fire to drive these great beasts through a narrow gorge and over a cliff. While the best hunting skills, proximity is still a need to kill a huge beast. 40,000 years ago, Neanderthals were on top of their form, hunting of animals like the giant steppe bison. The Neanderthals were usurped by an entirely new race of humans, the Cro-Magnon. They adapted and survived when the Neanderthals could not.