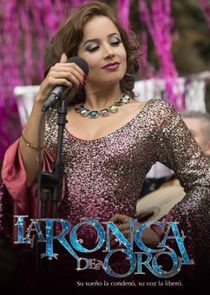 La ronca de oro (The Voice of Freedom) is a Colombian telenovela produced by CMO Producciones for Caracol Televisión. It is based on the life of the Colombian singer Helenita Vargas. Ana María Estupiñán and Majida Issa star as the protagonists, Diego Cadavid, Greeicy Rendón and Marcela Benjumea as co-protagonists, while Laura García, Leonardo Acosta star as the antagonists. La ronca de oro is the story of Helenita Vargas, a woman who wanted to be free in a terribly sexist era of the 1950s, where women had more duties than rights and were sentenced to be mothers and wives only. Helenita found singing rancheras one way to express her deep desire for freedom, overcoming all obstacles in a prejudiced society, starting with her family. Coming music of Mexico, which after years of struggle would bring success, was the origin of the worst humiliations and sufferings, but also became the soundtrack of her two great loves: one that nearly ended her life and another that filled her days with happiness. Helenita made her mark as a woman, as a person and as a singer, anticipating the taste and feel of the people. Like anyone, she understood that popular music has no age, no sex, no class and that in times of violence, which would achieve unite an entire people would be her unique voice.