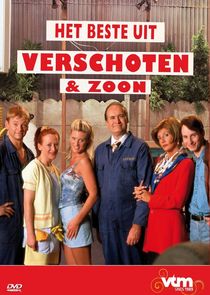 Verschoten & Zoon was a 1999 Belgian comedy TV series. It was directed by Wim Feyaerts and written by Bart Cooreman and was produced in the Dutch language. It ran until 2007.

This Flemish sitcom is about the intertwined private and professional life of René Verschoten, a dodgy independent garage-manager who stops at nothing to gain or save money. He considers his wife Magda, who dreams of socialite standing but is never at the height of her service-club friend Hélène, and son (hence the title) Sven -who leaves the series rather soon- essentially as financial drains, but also involves them in his dubious, usually back-firing schemes, as well as his staff: Kristof, a very zealous but dumb mechanic, his secretary, cleaning lady and general household help Conny and after Sven's departure in-living cousin and lazy mechanic Kevin.