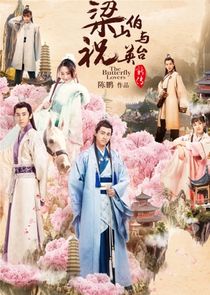 The Butterfly Lovers is a sad love story. It begins with a rich daughter disguised as a man to pursue her intellectual needs at an academy. There she befriends Liang Shan Bo. They study day and night together but because Shan Bo is a gentlemanly nerd, he fails to recognize her feminine characteristics. When they see their love for each other, it's too late as Ying Tai is forced to marry anotherman. Shan Bo falls critically ill and eventually dies after hearing the news. On the day of their wedding, Ying Tai sneaks off to visit his grave and begs for it to open up. Once it does, Ying Tai throws herself into the hole. The two dead love birds become a pair of butterflies, never to be separated again.