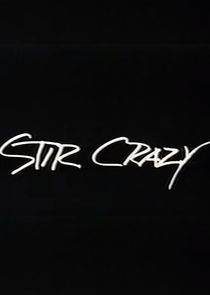 Stir Crazy is a situation comedy aired in the United States on CBS as part of its 1985 fall lineup. Stir Crazy was based on the 1980 film of the same name. The theme song was "Stir It Up" by Patti LaBelle.

It tells the story of two bumbling friends, Harry Fletcher (Larry Riley) and Skip Harrington (Joseph Guzaldo), who were wrongfully convicted and sentenced to 132 years in prison. While working on a chain gang they escaped and set out after Crawford (Marc Silver), the man who had actually committed the crime for which they had been sentenced. Pursuing them was the tough, relentless, and humorless Captain Betty Phillips (Jeannie Wilson), a female prison guard. "Captain Betty" was an amalgam of "Warden Beatty", the prison guard character played by Barry Corbin in the feature film, whom the boys were on the run from (the movie character's name, in itself, being a spoof of Warren Beatty).