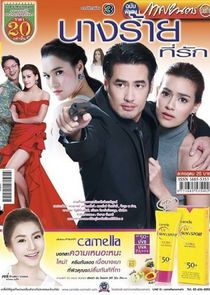 Pimchanok an orphan who grew up in a wealthy family. She is known in the entertainment industry as an actress that plays villains. Nati police. The world of cinema and show business does not interest him, until one day he saw Pimchanok and was stunned by her beauty. Their paths didn't overlap, but once Pimchanok dreams about his sister, with whom she was separated in childhood, and soon gets news that she died. At the funeral the ex-boyfriend's sister said that she was murdered, and he suspects that the two brothers are big shots in the entertainment industry. Pimchanok decides to investigate the death of her sister, and one of the wives of the brothers gets jealous and send death threats of Pimchanok. Then her Manager decides to hire her a bodyguard, and it becomes Nati.