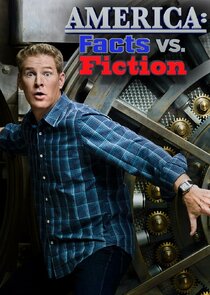 History as we generally know it is full of holes or half-truths, and a mother lode of juicy details have been lost, distorted, covered up or simply ignored along the way. Military Channel's new series, America: Facts vs. Fiction is on a mission to set the record straight. Hosted by former Naval officer and actor Jamie Kaler, America: Facts vs. Fiction is a wake-up call about the surprising hidden facts behind the most familiar and beloved stories from our nation's and military's past, filling in the blanks, debunking the occasional myth, and exploring why we sometimes get our own history, well, slightly wrong. Examining the past with a fresh perspective, this all-new series reveals that the "story" of America is just that - and far more remarkable than we ever thought.