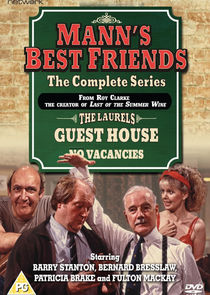 Mann's Best Friends was a Channel 4 comedy about the misfit residents of a lodging house, their landlord, and the ex-water board official who moves in to try to bring some order.

Henry Mann (Barry Stanton) is the owner of The Laurels, a rundown guest house populated by a motley crew of odd characters.

Hamish Ordway (Fulton Mackay), who has recently retired from his job at the water board, moves into The Laurels. He's a pompous, fussy, nosy little man who loves interfering in everyone else's business.

Other residents include an alcoholic named Duncan (Bernard Bresslaw) and a blonde "drama tutor" named Dolly Delights (Patricia Burke), who likes to entertain lots of "gentlemen callers" in her room.