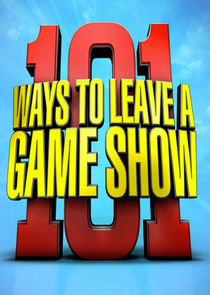 In 101 Ways to Leave a Game Show, contestants will match wits in a series of multiple choice questions, with one contestant being eliminated every round. But unlike any other game show in the world, the eliminated contestant will then be ejected from the show in spectacular fashion, i.e., being flown away strapped to the wing of a biplane, shot out of a cannon, pushed off the top of a moving semi truck, dragged underwater by a one ton anchor or yanked off a dock by a speed boat.