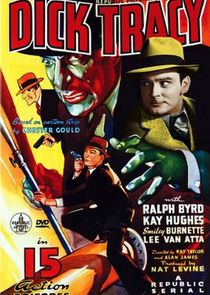 Dick Tracy was a very violent live action Police Drama on ABC TV. Tracy was a tough and intelligent police detective created by Chester Gould who was played by Ralph Byrd.. The strip made its debut on October 4, 1931 in the Detroit Mirror. It was distributed by the Chicago Tribune New York News Syndicate. Gould wrote and drew the strip until 1977. Since that time, various artists and writers have continued the strip, which still runs in newspapers today. Dick Tracy has also been the hero in a number of films, notably one in which Warren Beatty played the crime fighter in 1990.