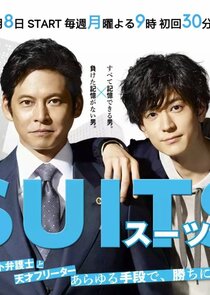 Shogo Kai, a graduate from Harvard University is a competent lawyer who works at a famous legal firm in the city. Due to his slightly arrogant personality as a result of his top class earnings, he occassionally becomes the subject of debate amongst his co-workers. However, he dismisses many of the opinions thrown at him, as he continues to successfully solve major litigation cases.

One day, he gets ordered by his boss to hire an associate partner for his position, so he decides to hold a interview session with his secretary. Meanwhile, Daiki Suzuki, a young man with highly proficient skills comes for an interview. Despite his abilities, he had been spending much of his life up until this moment as a delinquent, without a stable job.

However, after weighing up the pros and cons, he decides to hire him, even though he was originally reluctant to hire anyone with the background such as his.