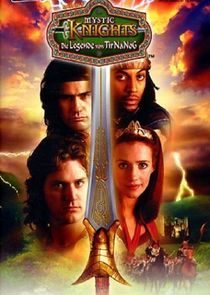 The story is based on Celtic legends. When a tyrant queen from the land of Temra invades the peaceful land of Kells, King Conchobar must rely on an ancient legend which foretells of an orphan who will find the mighty warrior Draganta and "bring peace to Kells for 1000 lifetimes." The legend also tells of the four Mystic Armors and Pyre the fire dragon. The recipients of the Armors are Angus, a miscreant of sorts; Ivar, a Moorish prince; Deirdre, Princess of Kells; and Rohan, a destiny-bound druid's apprentice and the young man foretold in the legend. They are joined by Aideen, a young fairy; Fin Varra, the king of Tir Na Nog; and Garrett, the eventual fifth Mystic Knight. Together, the five Mystic Knights continue to defend Kells from the Queen Maeve and all her evil magic.