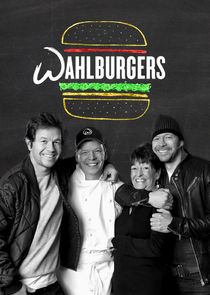 Wahlburgers goes behind-the-scenes of one of Boston's most well-known families, the Wahlbergs. Brothers Mark, Donnie and Paul join forces to embark on a hometown-based business venture, a hamburger restaurant that touts the family name. An homage to their humble beginnings, the restaurant is home base for the gang from the old neighborhood, including Mark's sidekicks, the real Johnny "Drama" and Henry "Nacho" Laun, Paul's trusty assistant Kari Burke and of course, the matriarch of the Wahlberg family, their spirited mother Alma. In the new season, Mark and Donnie juggle their roles at the restaurant while working abroad. Mark heads to China to promote a film and convinces "Drama" and "Nacho" to tag along. Donnie is on tour in London with New Kids On The Block when his fiancée Jenny McCarthy arranges for a surprise visitor to help stave off his homesickness. Back in Boston, Paul gets in over his head when he decides to join a fantasy football league, so he seeks help from family friend Rob Gronkowski. Brandon finds himself caught in a prank war with Kari, while Alma has a new love in her life - her new smartphone.