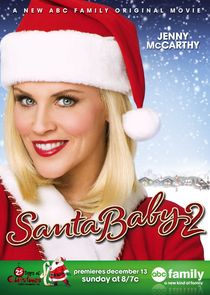 Santa Baby is an ABC Family Original Movie. It premiered on December 10, 2006 on ABC Family as part of their annual 25 Days of Christmas event. The film stars Jenny McCarthy, Ivan Sergei, and George Wendt and was filmed in Calgary, Alberta, Canada. It was directed by Ron Underwood. Mary Class is a high powered businesswoman with her own marketing firm, as well as secretly being the daughter of Santa Claus. A sequel, Santa Baby 2: Christmas Maybe, premiered on December 13, 2009. Santa Baby 2 (also known as Santa Baby 2: Christmas Maybe) is a 2009 made for television Christmas film and a sequel to Santa Baby. It premiered on ABC Familyon December 13, 2009, in their 25 Days of Christmas programming block. Jenny McCarthy, Lynne Griffin, Jessica Parker Kennedy, Richard Side, and Gabe Khouth all reprise their roles from the original. Santa's in the midst of a late-life crisis - he's tired of the responsibilities of the job and is ready to pass on the reins to his business-minded daughter Mary, who feels torn between the family business and running her own high-stakes firm in New York City, along with balancing a relationship with the love of her life, Luke.