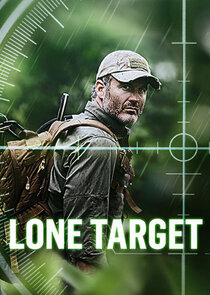 Discovery Channel is taking audiences on the ultimate chase in a real-life game of cat-and-mouse, pitting former Navy SEAL Joel Lambert against the world's most elite military and law enforcement tracking teams in new series LONE TARGET. With only what he can carry on his back, Joel will play an extreme version of hide-and-seek in unknown treacherous terrain with nothing but a basic survival kit and canteen of water as he attempts to evade capture in 48-hours or less. Using diversionary tactics and survival techniques gained from his 10-years of experience as a Navy SEAL, will Joel's training, skill and cunning all help him escape?

In each episode of LONE TARGET, Joel is dropped at an unknown secret starting point, and with a small head start, must evade capture from a different elite military or law enforcement tracking team and make his extraction - in less than two days - or risk capture. Following the chase side-by-side with cameras capturing the action from both perspectives, we get to experience first-hand the thrill of the hunt.

With Joel's reputation and the trackers' national pride at risk, the stakes are extraordinarily high. An expert in escape and evasion, Joel's background has well-positioned him to prey on each unit's hidden flaws--but evading highly specialized military tracking units and combating dehydration, hunger and the natural elements proves to be a greater challenge. Will Joel succeed or will he fall victim to the military or the environment?